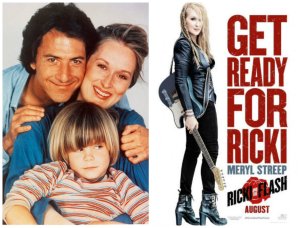 So say Joanna from Kramer vs. Kramer didn’t actually come back and fight for custody of her child and win because she was the mom and instead she moved to California and became an 80s rocker chick and then came back home once she got kind of old, and smoked pot with Dustin Hoffman while spewing great Diablo Cody dialogue…but it all rang hollow because no one really bothered to flesh out any emotions other than guilt sucks, following your dreams is great, but it sucks when your kids suffer, but they’ll be all right because a strong black woman (see: nuanced discussion) will stepparent them.

Then you’d have a movie where all the parts are kind of fun and worth seeing if you don’t actually think too hard, but at the end you really actually do feel like you just spent a wedding with your narcissistic boomer mother and you’re left with that sort of fuck it, family’s family, but it’s hell feeling.

That’s pretty much what Ricki and the Flash is like. If you want to laugh a lot and contemplate whether Rick Springfield is hot and be prepared to feel just a little bit disturbed, I say it’s worth the price of popcorn. And I mean, Diablo Cody.